What Have You Done To Solange? 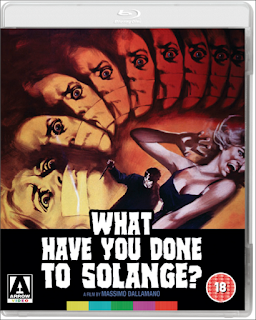 "Not after what happened to Solange...."


What Have You Done To Solange? is a hard watch for sure, but it's a grand giallo and one that holds up over time. The subject matter is rough, so be warned. However, it's a fun mystery with some fantastic character development and beautiful cinematography with a haunting score by Ennio Morricone.

Fabio Testi plays Enrico 'Henry' Rosseni - a teacher at a girls school. The dashing Rosseni is having an affair with one of the girls and is with her when she sees a knife flash in the woods. The gruff Rosseni is annoyed with Elizabeth (Cristina Galbó) for stopping their make out session over a silly delusion, however her vision of the knife proves to be a reality that Rosseni becomes helplessly involved in as the mystery unravels around him.

We have another relationship playing out in the film in a similar way to WHO SAW HER DIE? as Rosseni's wife Herta comes to grips with the fact that her husband is cheating and pulling further and further way from her every day. And of course we have an inspector looking into the case. :)
The acting is top notch in the film and the pace keeps things moving along nicely. Relationships seem real and play out in very interesting ways as it becomes very obvious that there's something deeper going on at the school.

Massimo Dallamano's Direction holds attention and his cinematographer background shows. Joe D'Amato is the cinematographer (and a CID officer in the movie!) and you can see where his style is starting to really come through in this, his 10th cinematography credit out of a WHOOPING 167!

Like I said earlier, the graphic nature of the kills is pretty awful, but the way it's played out is extremely tasteful. Well, as tasteful as it can be. And the overall tone of the film isn't exploitative, which helps a lot. We get a mystery that's solid with people undergoing many changes as the film rolls on. There are some smart and subtle changes as well, like the character of Herta shown and tight hair bunned and cold in the beginning of the film and softening a bit as she and Henry start to work out their marital issues.

Now, the film isn't perfect. We still have a few moments where you question why Inspector Barth is working with Rosseni so closely - especially since he's a suspect at one point. And there is a moment of exposition towards the end that was a tad sloppy to say the least. ("Let me explain exactly why the killer has done what they've done. Where's that PowerPoint I created a moment ago...." )  hehehe   However, the story is well worth some of the more minor quibbles and it's still one of my favorite mystery gialli and well worth a viddy!