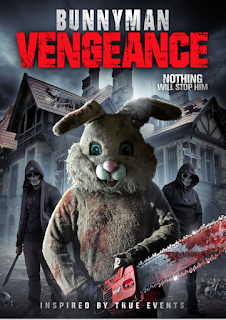 "Bunnyman Vengeance," I read as I started giggling.

I had seen a trailer for the original BUNNYMAN, but I had not seen it or it's sequel. So, when I saw that this was the third and final in the series, I thought that I should watch the first and second one first. That would have helped, I'm sure, but in the interest of time, I just dove in head first. And, I'm happy that I did.

So, there was a child who was SET ON FUCKING FIRE by someone! THAT'S the backstory! Jesus! hehehe  And we see a little recap  of the event (done in an interesting, home movie style) at the beginning of this film. Pretty much caught me up. That boy is the infamous "Bunnyman" here - covering his horribly burned adult body with the costume. And boy, does he have anger issues.

We meet the gang Bunnyman is hanging with which is compiled of two dudes with homicidal tenancies and developmentally disabled man. While they are a team, they are always at each other's throats. Now, this is where I need a re-watch. All of them save the developmentally disabled man vicious killers  and Bunnyman has a brutal temper. They are up to something at a haunted house style attraction they are building, but....I think I missed something....because I didn't get why they were killing everyone and anyone who came by. You know, usually there's a satanic ritual, hidden gold you're trying to keep secret, or something of that nature, but I didn't hear what it was. I had an issue with the screener and thought that maybe there was something lost in translation. (A second scan through revealed nothing to me)


But, none of that mattered after some time. I was watching and loving every minute of this wacked out film. HA! I loved it. It totally reminded me of old GRINDHOUSE films of the 70s. Crazy people up to no good. That HILLS HAVE EYES feel of people just being in the wrong place at the wrong time. It worked well here for sure.


Unlike some of the old grindhouse films, this film is shot really well. (Can you tell that's always important to me here at the HORROR SHOW? :) )  There are some fantastic shots that capture the environment and frame the grand acting expertly. And grand acting it is.

Omari Washington, Michael Shaun Sandy, Pucci Tres, and even the costumed Carl Lindbergh all turned in fantastic, heartfelt performances. They were never over the top or wonky - super solid stuff that really sold me and hooked me. While the overall concept of a burned man wearing a bunny costume to hide himself may seem silly or goofy, it's never played that way. It's dead serious and it totally works. This boy was burned alive and lived to tell the tale as other children picked on him and mocked him. Totally grounds to become a homicidal nutter who wears a bunny costume to hide himself.

Which brings me to another grand element of this film - the gore and CGI visuals. Usually, lower budget CGI effects and visuals are...not the business. They aim high many times and miss that mark more often than not. It can be distracting and awkward. Unless, of course, you go all out and fold the visual effects into...let's say a drug induced, psychotic music video in the middle of the film and make gore so over the top and graphic that your viewers chuckle at the horror of it. Like I did. I thought the gore was amazing. They really went all out and pushed things as far as they could. Poles fly through people, shovel handles pierce necks, and more. So much more. This was another neo-grindhouse element for me. Instead of rubber heads and hands being hacked, the BUNNYMAN folks took to the computer age and made it another important element of the film that seems right at home along side a fried man in a bunny costume.

BUNNYMAN VENGEANCE is a fun ride. Don't take things so seriously. Just roll into it and enjoy the madness of it! Well worth a viddy!

Posted by malcoJOJO at 5:11 PM