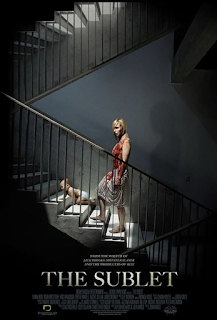 Well well well....here we go again with the "Hmph....that was actually pretty good," from me, but there it is...it was pretty good, actually.

Now, I don't want to give too much away here. It can be tricky with these movies.

So, Joanna and Jeff have a baby, lots of new pressures in their lives due to it, and have just moved into a sublet that proves to be a perfect pressure cooker for the stuff they are dealing with. They fall deeper and deeper into the new baby fire as they try to make Jeff's career as an actor work with Joanna as a full time stay at home mother - a job that is filled with daily pressures as it is.

But....is theirs the only sadness the sublet has seen? Is their pressure strictly related to the items listed above...or is there more to it? 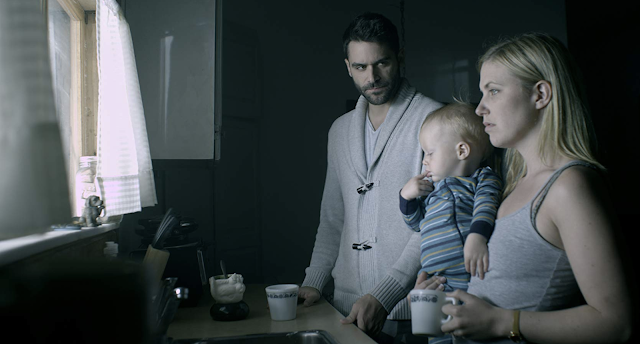 Basically a one-set-show, Tianna Nori and Mark Matechuk do grand jobs in what could laps into soap opera territory with ease. They get the new parent free fall right. This is really due to the script from Alyson Richards and director John Ainslie. Things get more and more strange as the movie goes on and what started off as a rather simple tale devolves into something more and more complex and off-putting as things go along. 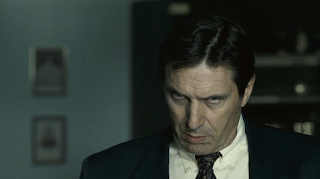 ( I love when the detectives arrive - a fun performance from Mark Ettlinger and Jeff Sinasac! ) 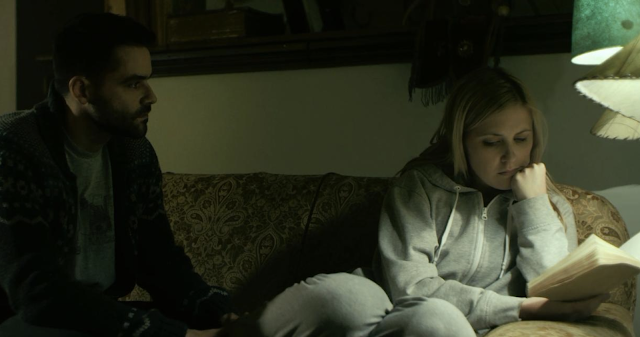 Posted by malcoJOJO at 3:05 PM No comments: 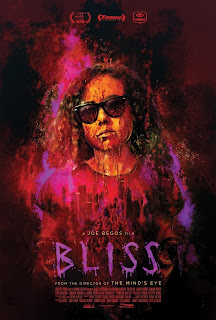 Artist Dezzy is under pressure to complete a painting. A lot of pressure. She's out of cash and out of time with her landlord wanting cash and the gallery wanting their goods. She needs a break from it all, so she goes to see her dealer. And that's when all hell breaks loose! A dark and bloody hell.

I kinda see this film as being THE HUNGER meets MANDY. It just came to mind. And I loved it. This sexy and visually stunning little trip goes all out with sex and violence at the forefront, but never overshadowing it's wild and twisting storyline of a persons decent.

Dora Madison turns in an amazing performance, just tearing things up like a little tornado. We even get fun little scenes with George Wendt and Abraham Benrubi as she starts to fall further and further into her new world and further down the path to some really dark areas.

Begos' story is fantastic and super solid. It's a very interesting take on a theme that can often be dull and dripping with tropes no one really wants to see anymore. He really took things to interesting areas and at a rocketing 80 minute runtime, it feels like a fantastic horror rollercoaster ride.


Check it!   AVAILABLE ON SHUDDER at the time of this posting!


Posted by malcoJOJO at 2:44 PM No comments:


I recently had the pleasure of being surprised by another film. When I saw one of the posters for it, I shook my head and sighed. The poster showed a huge city with alien ships around it. I thought, "Not on your budget. That's not going to be happening."

Then....I saw the trailer and thought I'd give it a go. The trailer looks great.

As my screener started...my eyes narrowed and I viewed the film with caution. Ok, there were some things that I started to see here and there that set me off a bit, but they were rather small things that didn't take away from the fact that I was locked onto the screen. (Some dodgy audio mixing and camera moves in the beginning paired with the lead actor and her rather interesting acting style that I had to get used to)

But, as the film unfolded and the plot started to be revealed, I was totally sucked in and loving where things were going.

We have a classic alien attack film here, but with a few really interesting new ideas added into the mix. It seems that they are able to make people have suicidal thoughts, which ups the danger and risk factors overall. When will our leads be driven to take their own lives like many others in their town?

They also kept it set in a small town which was a major win as I see it. If they had tried to run this scenario in a large city, this film would have gone the sad way some others have gone in the past leaving you to wonder why we don't see more people and why we're limited to a few locations that seem to be in an abandoned warehouse district somewhere. :::grin:::  I've seen this MANY times before and it's distracting and upsetting. heh  These folks play well within their budget and it's grand.

The small UK village feel really locked me into the story. The police officer leads who were in the area knew the people they were trying to help and the people knew them. They had a history. That aspect made things more interesting for sure.

And gore? Yup! There are some really grand splatter effects that manage to add to the story without being too distracting. CGI effects blended with what looked like practical effects seemed super seamless.

What I was REALLY impressed with here, however, was the 3D and effects work. This is not a major budget epic. It's not even an indie funded medium level effort, I don't think. However, the effects are very good and there are a lot of them. They don't hide things in darkness or used the "camera as villain" to avoid having to show the aliens and the tech. They full on show rather cool looking tech monster robots attacking and stalking in full light. Massive ships take to the skies and sweep past trees. HUGE alien figures stroll along at roughly two stories in height and I was loving every minute of it. They were solid and locked into the scenes and felt like they had weight and that they were actually IN the scene instead of being pasted on top.

VERY difficult to do, but seeing as writer / director Neil Rowe looks like he has a VFX background, it seems like he knew exactly what he was doing. The story and direction are engaging and interesting and the whole film holds up right through to the end. Our leads Katherine Drake and Ritchie Crane have a lot of good dialogue to work with and the supporting cast is not only up to the challenge, but have some grand, WORLD WAR Z-like monologues to sink into.

From IMDB
In a small rural community local police officers Zoe and Patrick begin their shift as normal but it soon becomes clear that something is wrong. Strange events unfold before their eyes, residents begin behaving strangely and mass suicide panic spreads amongst the community they are trying to protect. Zoe and Patrick realise they are under siege from alien machines as they become cut off from the outside world. They are forced to do battle against these uninvited visitors. Can Zoe and Patrick save their community and the outside world from extinction?

Posted by malcoJOJO at 12:00 PM No comments:


LOVING the work of Stefan Koidl!!!  Amazing artistic skills aside, his creation of really wild and creepy images is magical and chill inspiring. 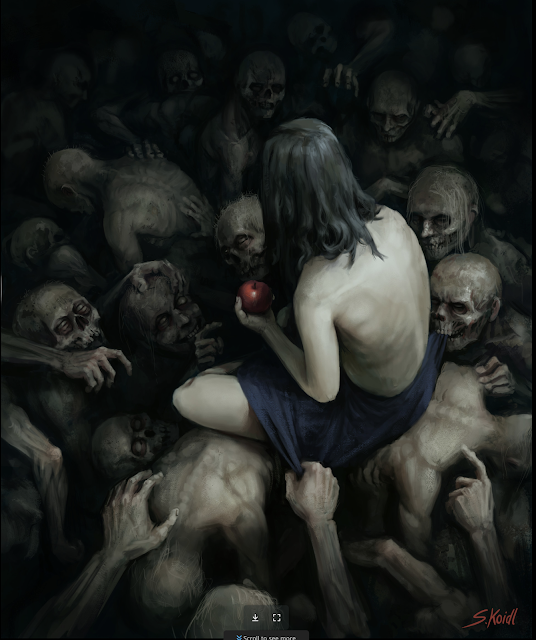 He has a very interesting style as well. He plays with perspective and focal depth in his art that really helps sell the scene. The worlds he spins into life are all at once beautiful and horrible. Check him out on the links above and show this amazing artist some love! 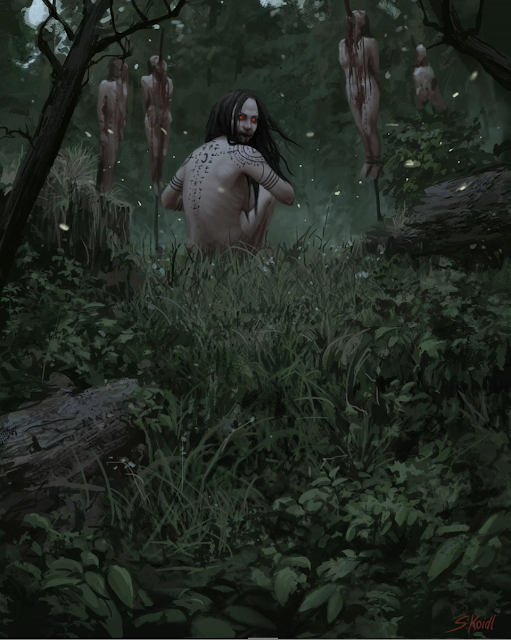 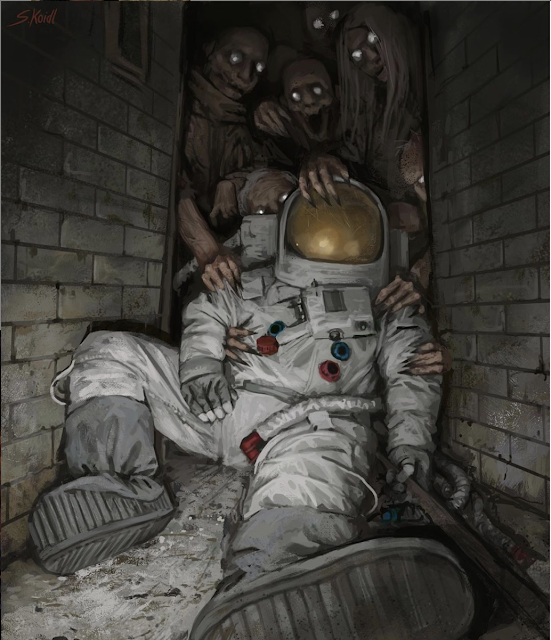 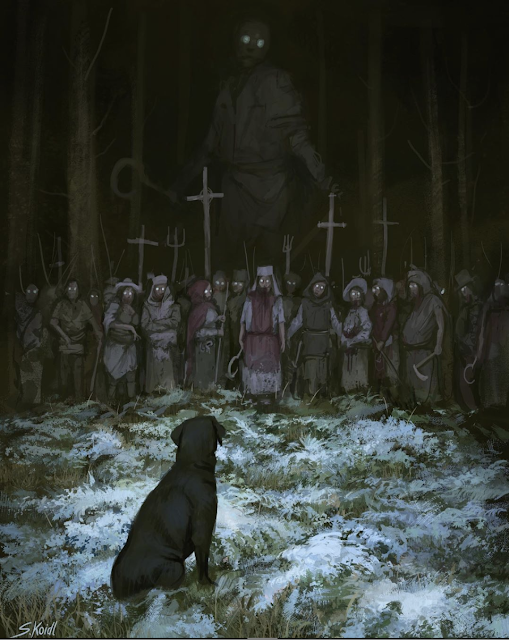 Just imagine driving and running into this scene!!!!   Holy crap!! 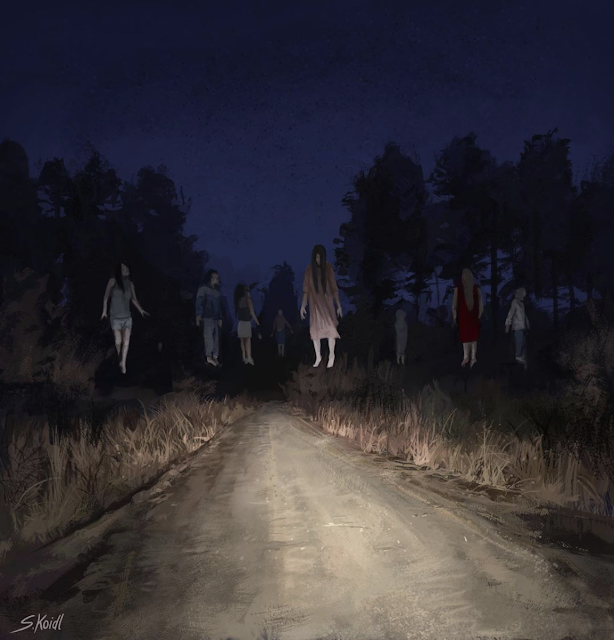 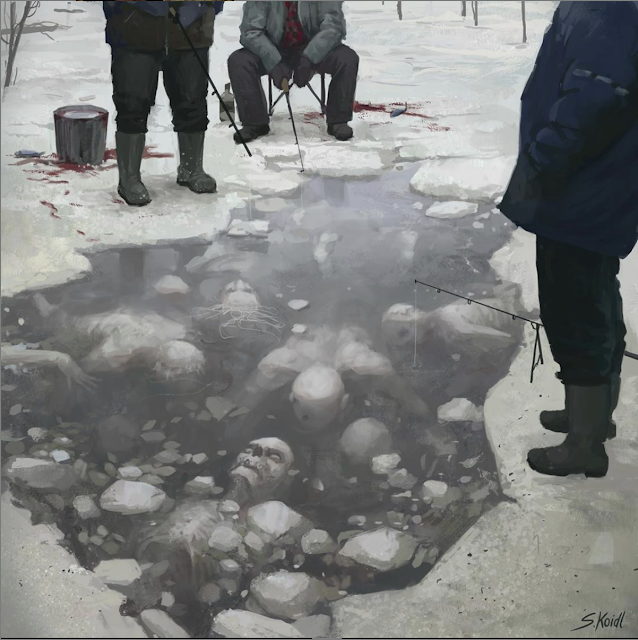 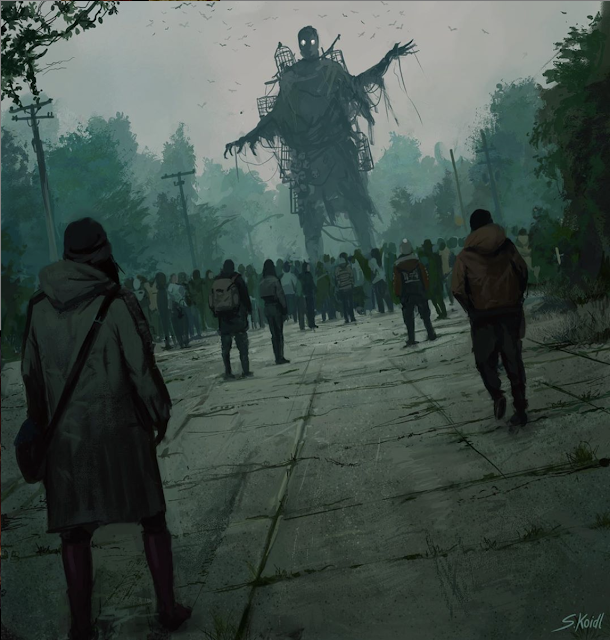 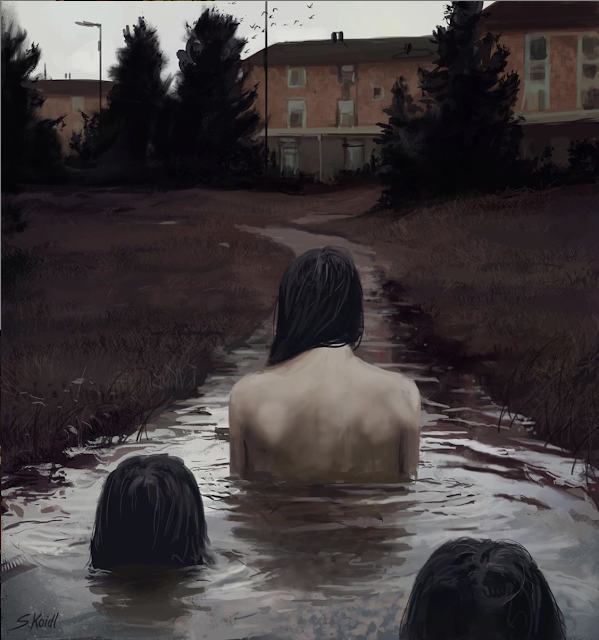 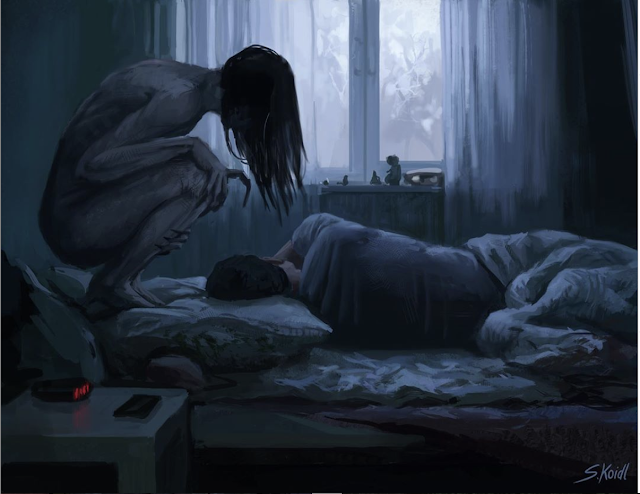 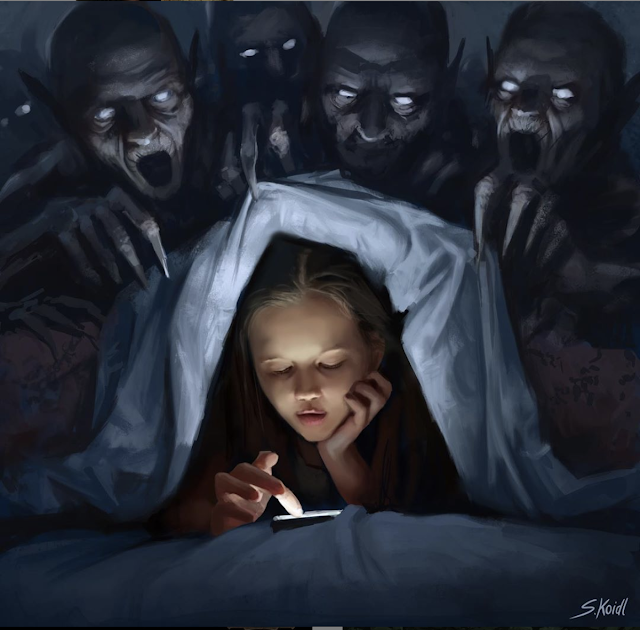 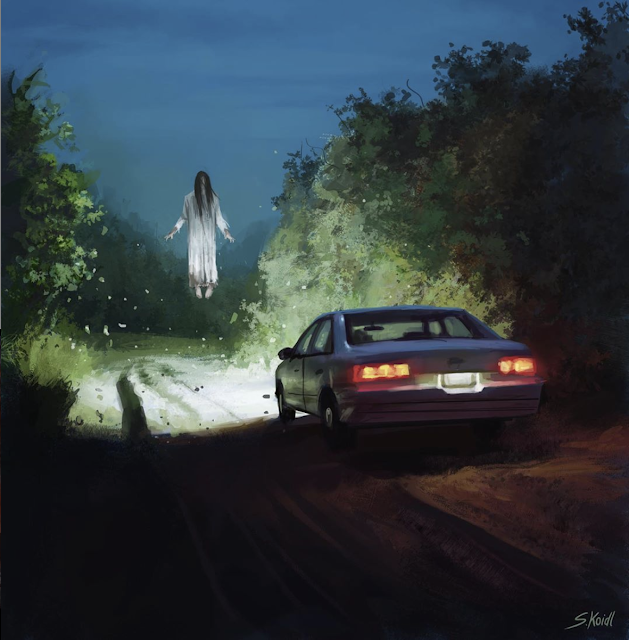 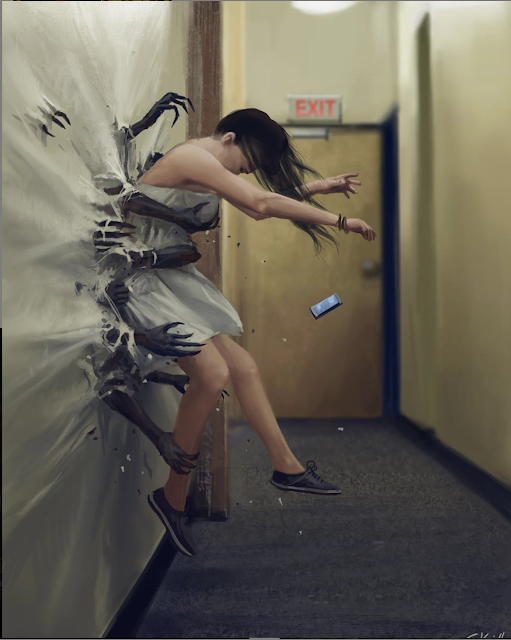 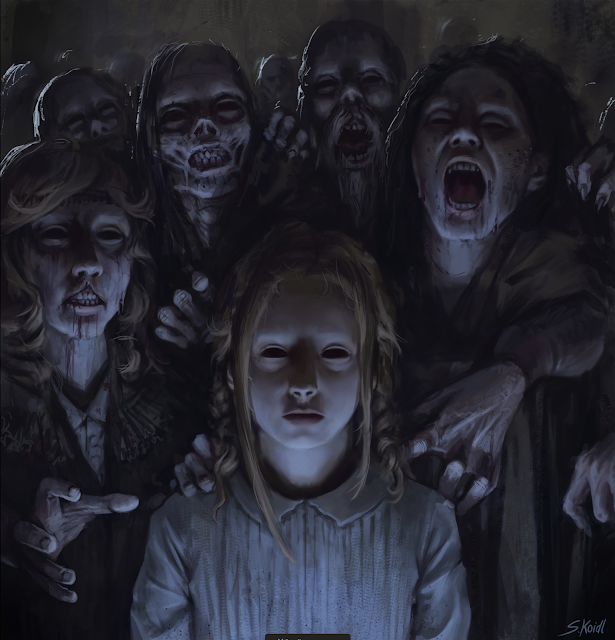 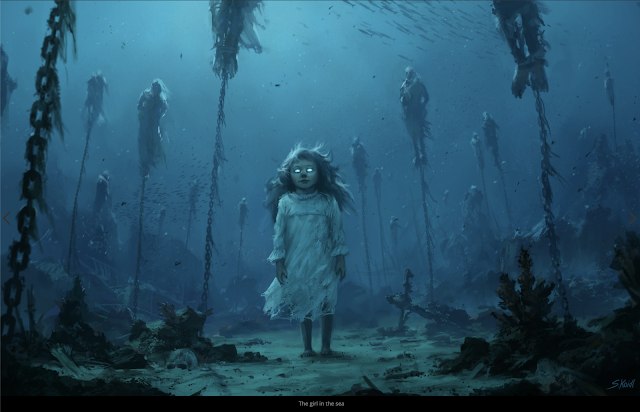 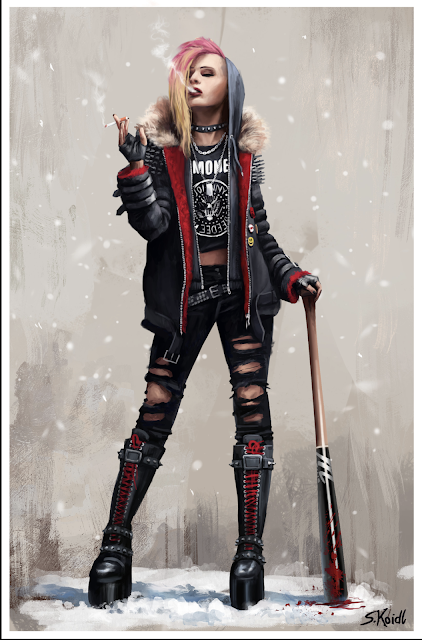 Posted by malcoJOJO at 9:22 AM No comments: