Goodbye to our followers. We're taking a little break, but may be back after a time.

Maybe we'll see you when there's no more room in Hell.  :)

"I am disillusioned enough to know that no man's opinion on any subject is worth a damn unless backed up with enough genuine information to make him really know what he's talking about."

Posted by malcoJOJO at 8:32 AM No comments:

Email ThisBlogThis!Share to TwitterShare to FacebookShare to Pinterest
Labels: horror 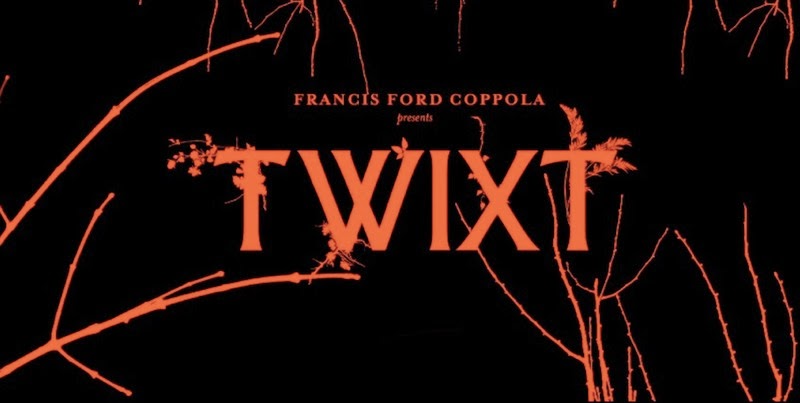 I wanted to see more films the general public didn't like to see if my new found love of these films was going to hold true and steady. I liked Dario Argento's Dracula, so I thought I might like TWIXT as well - another film people wanted to drown at birth. Go figure - I really liked it as well.

There are some "Wait, what?!" moments in it for sure. It tells the tale of a "bargain basement Stephen King" who is on a floundering book signing tour. He's in dire straights, needing cash quickly before his wife sells a rare book on him and fighting a losing battle against drinking too much. The strange town he rolls into as a next stop may be the key to his next story...or the death of him. 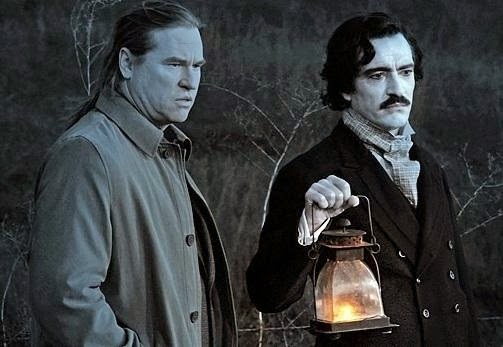 The film has a strange look. It's dreaming and odd. At first I thought it looked a little cheap, but as I settled in, it took on the same quality some of my more vivid dreams take on. Super real and super unreal all at the same time. Things take place in this dream state of author Hall Baltimore (Val Kilmer) and we watch them unfold in that fun, dream logic way and it totally made sense to me. 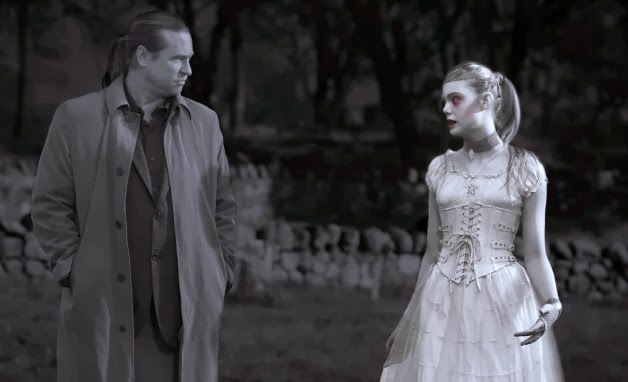 Elle Fanning and Bruce Dern act around the voluminous Kilmer and everything works really well. I almost think that the whole thing might have been more widely accepted if Francis Ford Coppola wasn't associated with it. People wanted Dracula or The Godfather and they got....well...not that. But, the man is still behind this and I think he can make the hell out of a film and that shows here. While the plot and pace and visuals are very experimental in some ways, the film is solid, interesting and well worth a viewing if you like to see someone trying something new. I appreciated it whole hardheartedly and I was very happy I ignored the murmurers and sat down to watch. 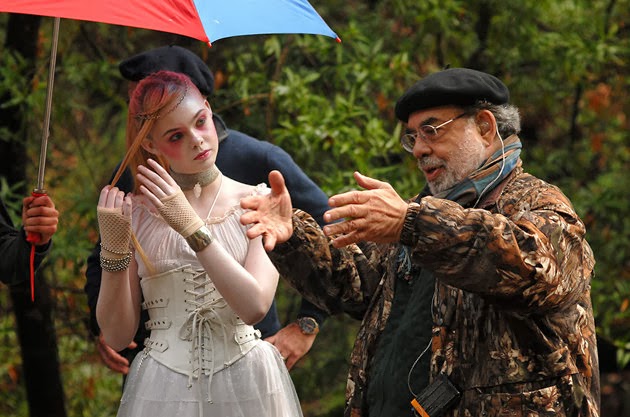 This film spoke to me in many ways. I'm going to follow up with some additional research on just how and why Coppola made the film. I find myself thinking back on it often. And, I find myself wanting to re-watch another fave of mine DEMENTIA 13 - another Coppola work I love.

I took some time to glance at some of the articles ripping this film to bits. Some of them are so horrible that I found myself wondering if the reviewer was going through something traumatic in their lives. This one just seems...mean.

However, if you do some looking, you can find some reviews that seem a little less venomous. This reviewer gave it a 7 - http://www.popmatters.com/review/172748-twixt-a-story-of-artistic-reinvention/ - and had this to say as a wrap up:

"Some directors mellow in their late careers while others amp up their eccentricities; somehow, Coppola seems to have done both. Twixt is a bizarre assemblage of techniques that’s at once amateurish and brilliant, lackadaisical and carefully controlled. It feels like a work of great promise from an up-and coming director, and the knowledge that Coppola already has a massive body of work under his belt makes for a fascinating cognitive dissonance that plays out within the film’s own blurry story of artistic reinvention. It’s uneven, frustrating, and every once in a while, exhilarating, and you probably don’t have to worry about looking stupid at a cocktail party if you choose to pass this one by. But man, this Coppola guy is one to watch."

Cute and honest, I think this is a fair assessment. Like my statement above that speaks to Coppola name being somewhat detrimental to this film, I believe that it would have been on the "Check it out" list if it had some from someone with less history behind him.

The most interesting piece of this is the interview with the man himself. It renders everything else far less interesting. Nothing better than hearing what was going on and driving a films creation from the creator himself. https://movies.yahoo.com/blogs/movie-talk/francis-ford-coppola-talks-twixt-competing-former-self-185226581.html

"A lot of people talk about, “Oh, where can the cinema go? What’s the next act?” When they were saying it was 3D, I said, “Are you kidding me?" Cinema is more magical and more powerful and more interesting than just that it will be 3D.

Cinema can have the same revolution that the novel had in the last 200 years. The way we approach the story and tell a story can find new means. And certainly, the advent of the cinema as what is essentially a digital medium implies that it doesn’t have to be as canned as it always was in the past. It doesn’t have to be a lot of pieces of celluloid glued together. It’s a bunch of digital files that can express themselves in millions of ways. I mean, there’s a lot of exciting stuff in the future for cinema and I just would like to taste a little of it before I’m out of the story, all together."


Posted by malcoJOJO at 1:56 PM No comments: 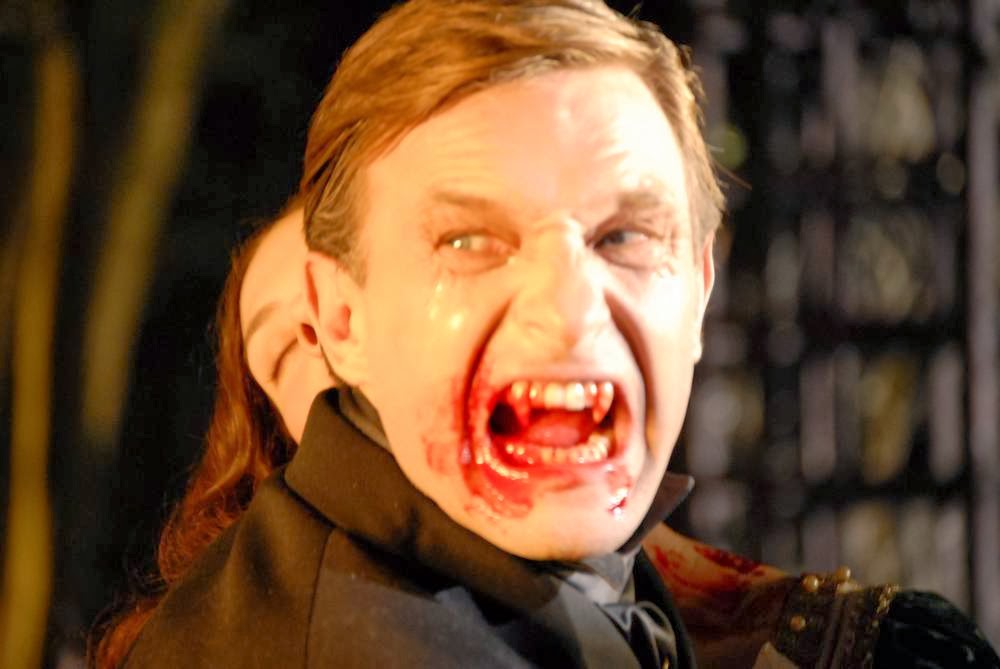 I'm not going to spend a whole lot of time on this film.

People ripped it TO PIECES. They hated it. Laughed at it. But, I'm going out on a limb and saying...I didn't hate it. It's fine. It's watchable like a college play is watchable. I watched and didn't want my time back afterwards and that's saying something.

There's nothing new here. It's Dracula. But, there are some fun Argento-isms that I enjoyed seeing. The story moves along and things happen....:::shrug::::   There are some nekkid folks in it, blood and biting. Everything you'd expect. I think it was due to the extremely low expectations that I didn't walk away feeling this movie was all that bad. Especially when watching at home with a small glass of an adult beverage on my comfy couch via Netflix. It was a good time.

Now, there are HORRID things in here as well. Things they just should have masked with shadows, fog and darkness. The 3D. It's bad. It's cheap and bad and it should not be as prominent as it is. When it comes up, it's obvious and sad. 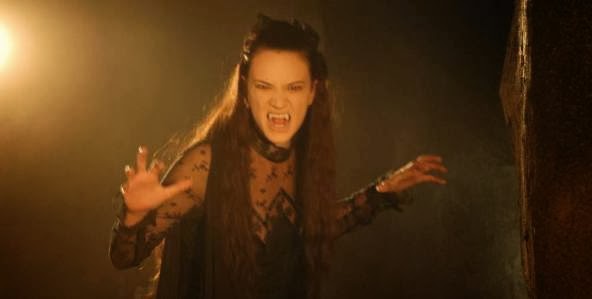 Asia "Yum Yum" Argento is still delicious, but she seems like she's playing well under her age range and it really doesn't work. The period clothing and hairstyle has an adverse affect on her charms as well, but she can vamp it up in true Asia style and it's fun. 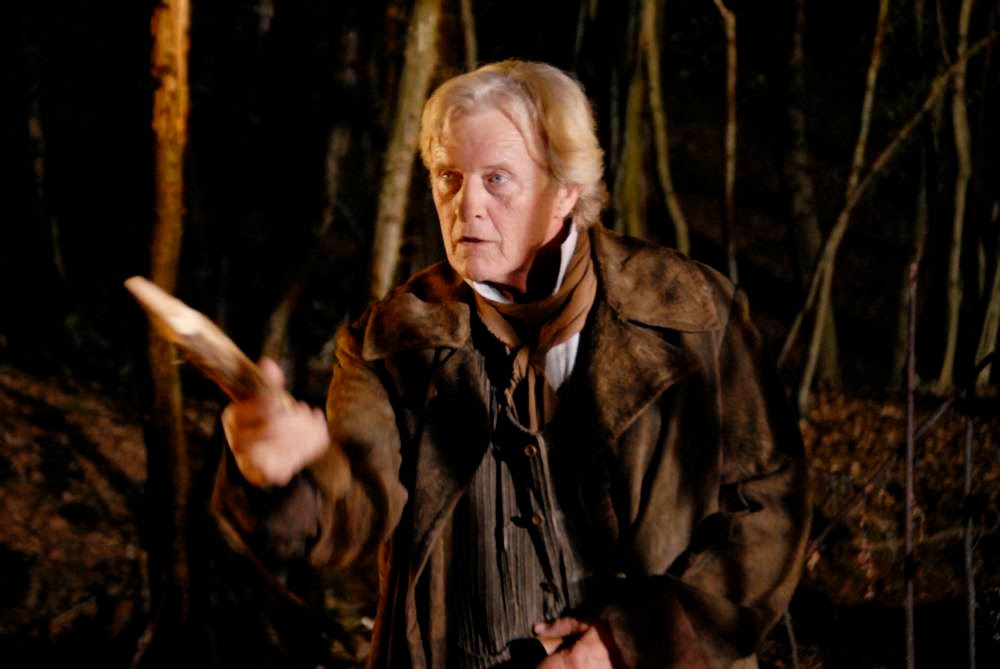 And...Rutger Hauer in a "what am I doing here?" portrait of Van Helsing is just...yeah. You have to see it. It's fun in and of itself. :)

The lighting is strange overall as well. It's such a bright film. However, I think I might get what Argento was going for. 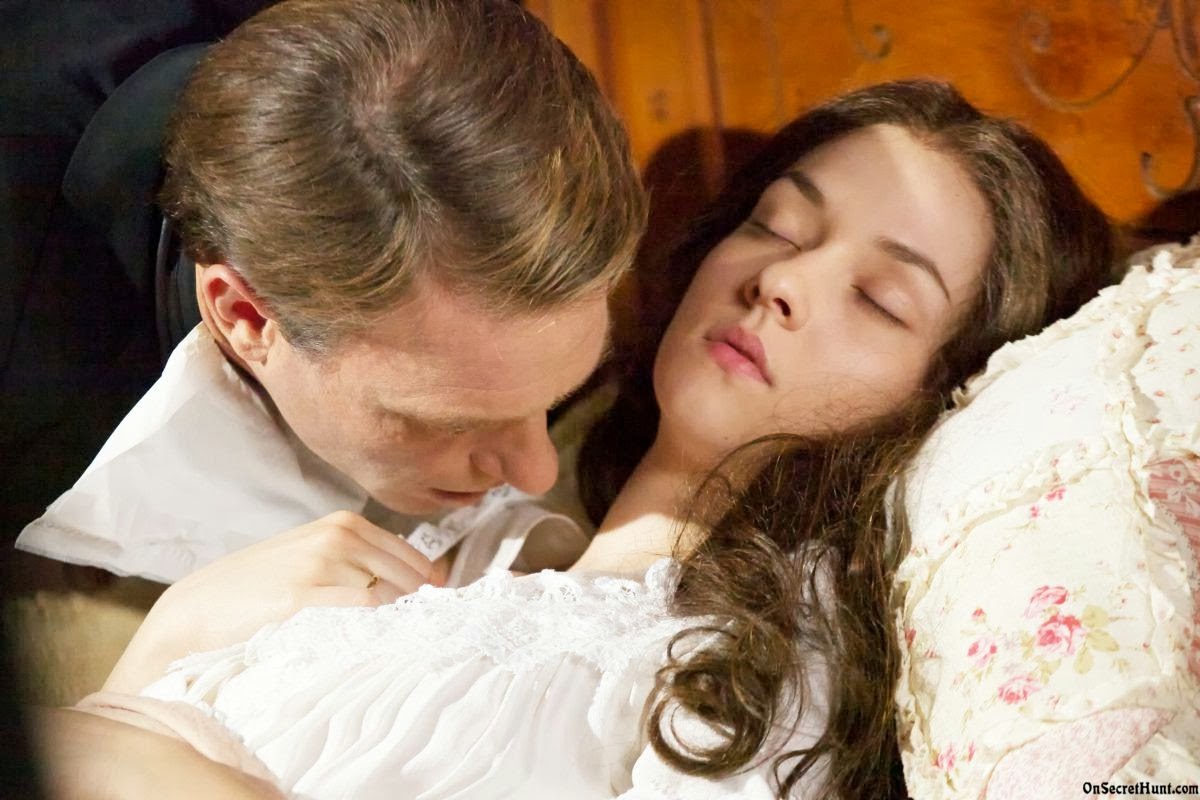 If you look at old Hammer films, they have the same look at points. Bright and stage-like, the lighting is blown out and in your face. I thought....just for a moment...that Dario might be going for this bright look of the older Hammer films.

At any rate, the film was fun and I enjoyed watching it. I still would have LOVED to see a SUSPIRIA Dario era Dracula - I think that would be really wild. Toss this on if you're in the mood for some fun post-recorded dialogue, bad 3D and strange turns of events. It's fine. 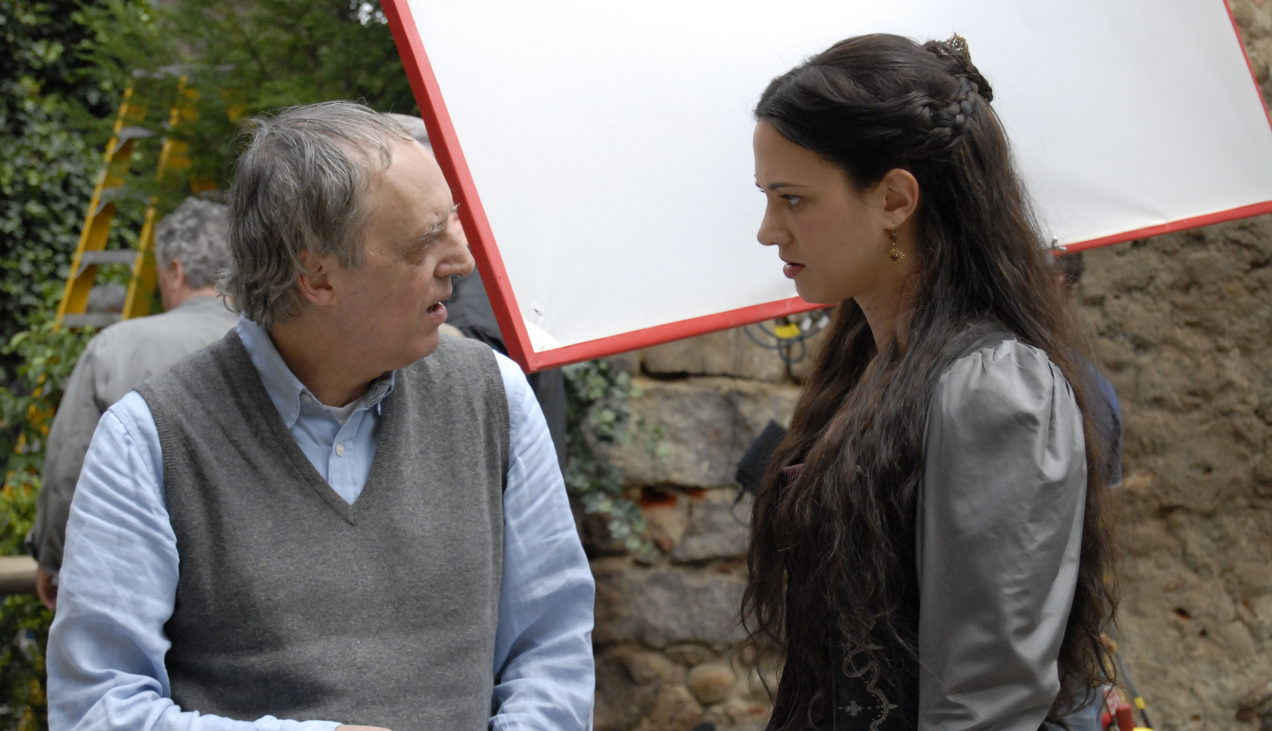 Posted by malcoJOJO at 1:19 PM No comments: