Adam Wingard seems like a guy that is just driven to get stuff out into the world and he's not scared of working hard to do so. From Tumbler to Twitter to events and creative, he seems like he's constantly moving and striving. It's inspiring to see. I've been trying to play catch up with some previous works (I recently caught his co-directed feature Autoerotic - so good) and LAURA PANIC popped into view. 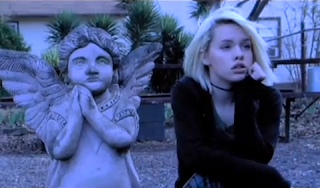 The plot is rather simple in this 2008 short. An obsessed girl follows her love and gets in a bit of a...situation...with his room mate. Did I mention that she's bonkers?

While the voice over isn't 100% with me (no voice over ever really is with me), it's the only way this story could be told keeping with it's style. The acting and edits are sound and the Adam Wingard style is definitely there.

I love the work coming out of these indie directors, writers and actors of late. Wingard, West, Barret, Eisener, Sánchez....they are just turning out really grand work and I hope that it keeps on coming!It's also fun to see actors returning to work with the same group from time to time. The "Laura" character was played by Hannah Hughes who went on to be in another Wingard item from V/H/S/2 - the "Phase I Clinical Trials" segment. Working with the same actors and writers seems like a good way to go if everyone wants to keep creating great content. You already know each other and when you hit the set, you're ready to roll. It must be fantastic.

Posted by malcoJOJO at 11:09 AM No comments:

Happy Holidays from The Horror Show 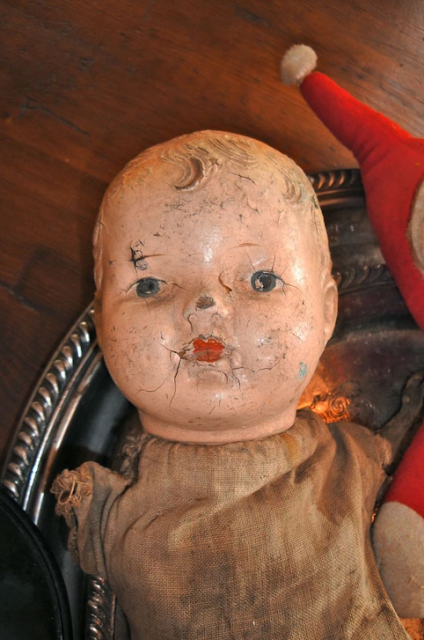 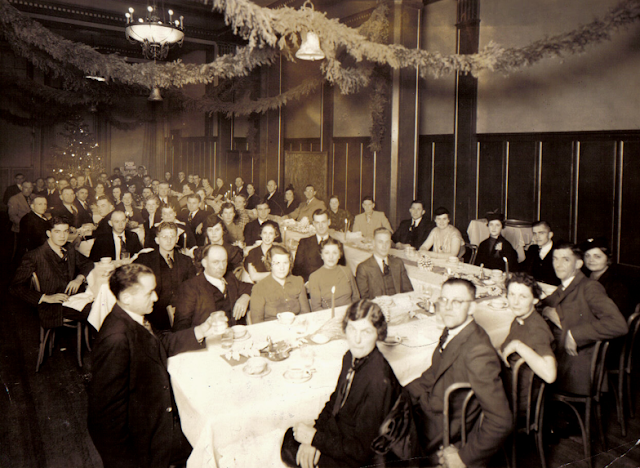 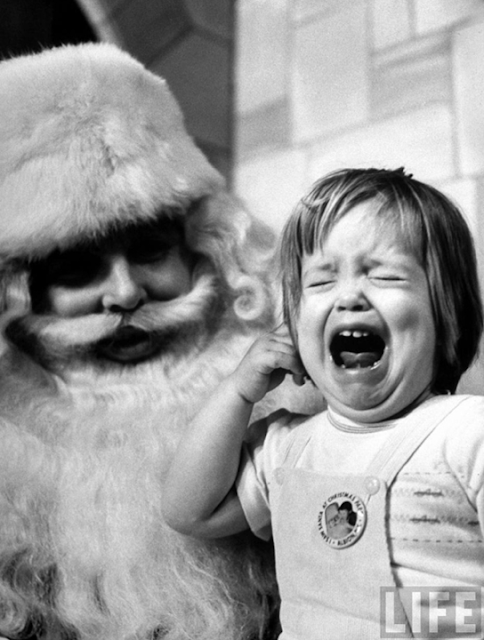 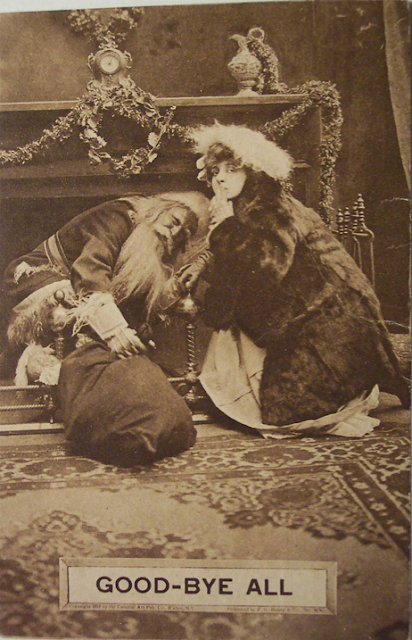 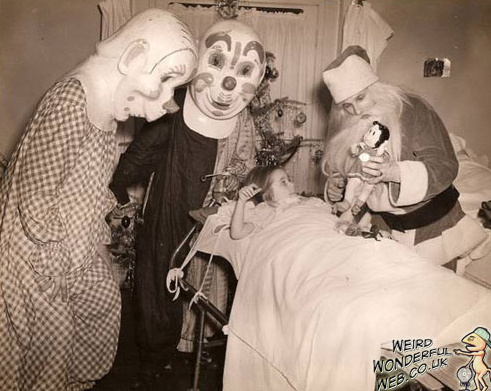 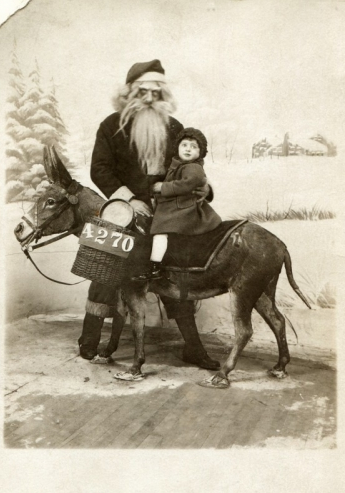 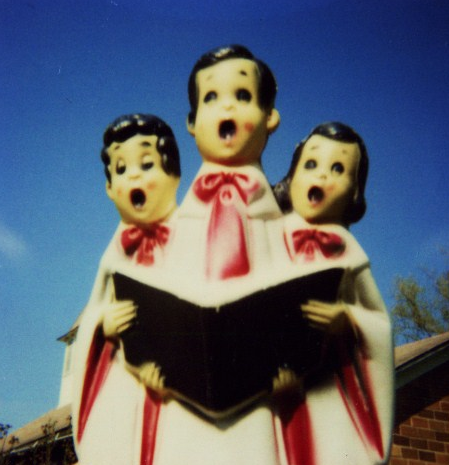 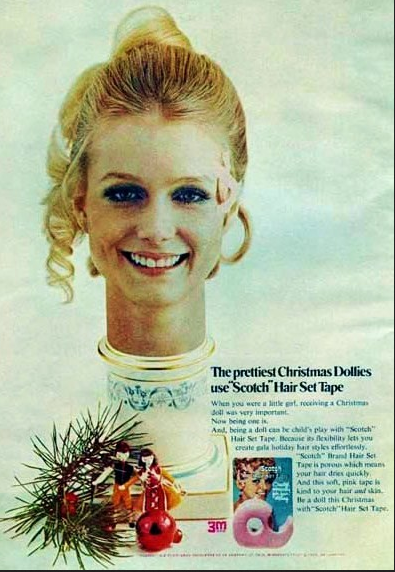 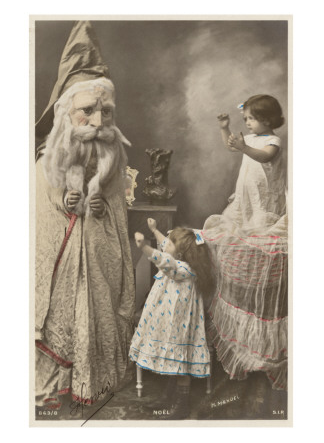 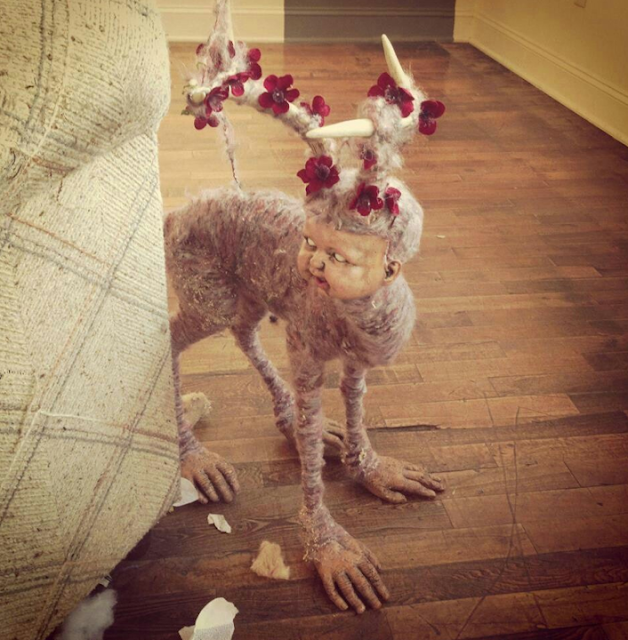 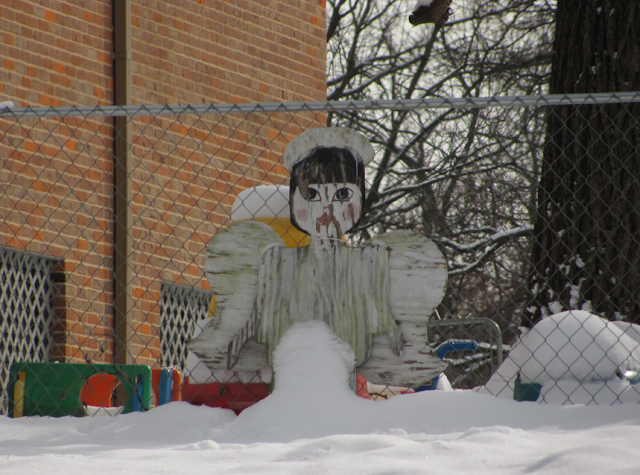 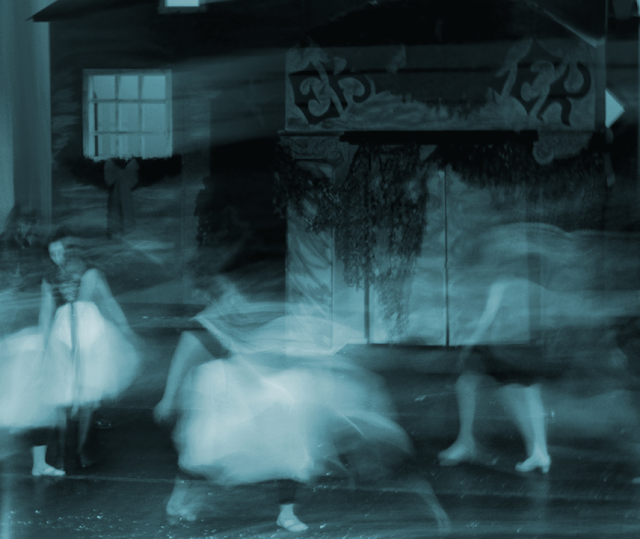 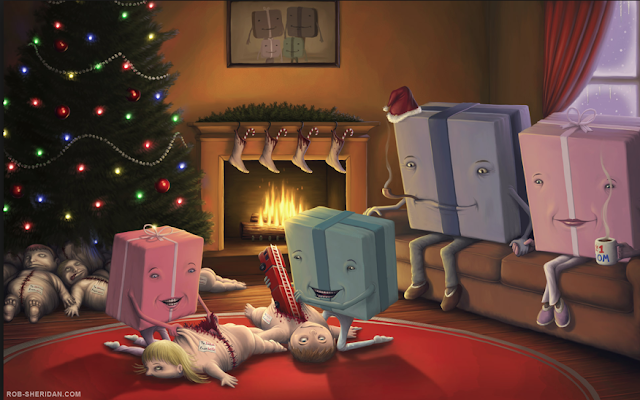 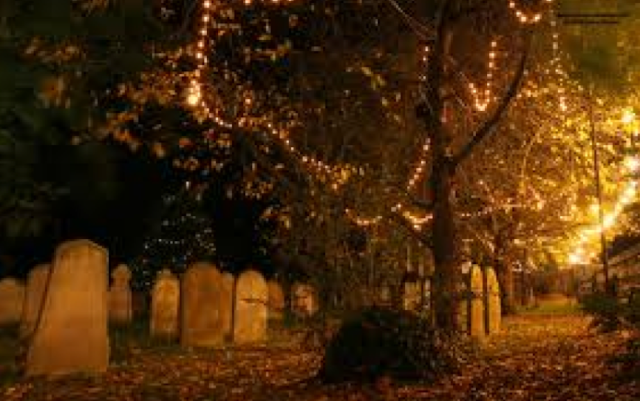 Posted by malcoJOJO at 8:20 AM No comments:

A Haunting in Connecticut 2

I checked out A Haunting in Connecticut 2: Ghosts of Georgia. No, I didn't loose a bet, I wasn't drunk and I'm not into self abuse. It just looked like it might have some redeeming value and it was streaming on Netflix, so what the hell.

First, the damn name. This is a huge pain point for me - these movies that share a name with another film and little else.

I, Robot - Yes, it's about robots and so is the original novel. That's pretty much where it ended. Why? They couldn't get the rights originally, so they started shooting another robot script...until the rights came through. Then, they just....blended the two scripts in a blender and shot what poured out.

Last Exorcism..uh...Part 2   Did it really need to dovetail off? I mean, it has the same girl in it, but it could just be another ghostie, right? Anyway....

Well, this Connecticut film is the same way. Firstly...A HAUNTING IN CONNECTICUT. CONNECTICUT!!!! Jebus - at least have it happen there if you're going to use the friggin' title! LOL  But....like I said....I moved on.

Things are simple here yet again. Family moves into a new home. Family has their own "ghosts" they are dealing with. Family starts seeing ghosts all over. Hot sister in law used to fly fighters for the Galactica. Oh...wait...sorry...got confused because Katee :::sigh::: Sackhoff is in it. (Battlestar Galactica) •ahem• Anyway...yeah...so...

Oh....yeah...ghosts all over the place. Kid talks to ghosts. Yadda yadda yadda. You know the drill. However this had a story that I found to be very interesting. I won't give too much away, but it has to do with the Underground Railroad, slavery and a "Stationmaster" that helped slaves escape. There was some actual meat to this storyline and it got me involved eventually. I wasn't just waiting for effects shots to pop up. 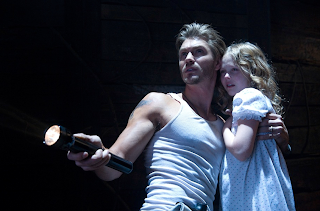 AND, the biggie - I didn't call it like I usually do. Usually I can call out exactly what's going to happen in these films. A fall, a stumble, a jump scare, etc. Some were hilarious when I got going. I felt like I was willing the film to unfold before me. (The Possession comes to mind) This film didn't do much of the simple stuff. It choose to rely on story to get it's points across. The only sad thing was there was so much story that they had to resort to a section of flashbacks and exposition to explain what was going on at one point. I forgave it, however, because I found myself saying, "Ooooohh....I get it...Huh!" out loud when it happened.

Now, don't get me wrong - this film isn't perfect. Not at all. There's still a lot of fluff in here and not even a special appearance from Cicely Tyson could lift it into the realm of "great".  The film got 5/10 on IMDB and a sad 26/100 on Metacritic. (Oddly, The Possession got a 45. I liked Connecticut better) I didn't expect ANYTHING from it and it actually managed to give a lot - I appreciated that about the film. There is a lot packed into the film and, unlike some recent "paranormal" films of late, I wasn't bored 10 minutes in and just CRYYYYYYING out for SOMETHING to HAPPEN! :)

If you want to see some ghosts, some rotted corpses and some TOOL-like rock video flash-cut ghost edits, then you may want to toss this film on one night and give it a go. 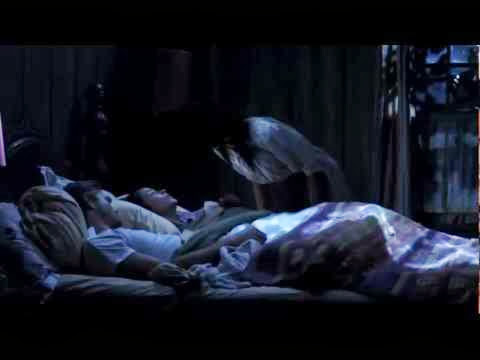 Posted by malcoJOJO at 4:14 PM No comments:

I just watched Jon Wright's Tormented - the film he made before Grabbers. I'm not sure if I liked it, but I didn't hate it. It was strange.

Like Grabbers, there is some comedy involved here, but it's not as obvious as in his follow up. There's an awkwardness and clumsy quality to the whole of it that makes it uncomfortable to watch at times. The camera work is overly kinetic, the pace is odd and the story seems like it could be far stronger if the running time was shaved by 20 or 30 minutes.


HOWEVER, this is not a "bag on it" review.  I still enjoyed the film. The point here is that Grabbers does many things better than Tormented which is a good thing. I was actually happy that I viewed the films in this order. It shows a progression forward that got me excited about seeing future works by Mr. Wright.

Tormented is somewhat basic. It opens on a school memorial service for a boy that killed himself. The boy's one friend calls out that various people in the school tormented (Heh? Heh?! ok...he didn't come out and SAY tormented...) the boy and that they were all hypocrites for being at the memorial. Long and short, there was a "Beautiful People" group that teased and harassed the boy to death. One boy one, said group gets nasty comments texted to them via the dead boy's cell phone. Death and violence ensues with - spoiler - graphic violence and some supernatural turns.

Tormented has another level to it as well. While the device of bullies and vengeance is really nothing new, there's a grand show made of the other end of the spectrum that is overlooked from time to time. Those folks that may not bully directly, but may not jump in to help the victim either. I liked this aspect of the film. Sadly, I've been that person before with disastrous results. (The girl I didn't stand up for in 3rd grade turned out to be a model later in life. She had the pleasure of smirking at me and slowly shaking her head no when I said we should hang out sometime.)  :)

While the main plot is very well known, there are a few fun twists and takes on this familiar, genre classic that I enjoyed. Again, while I wasn't thrilled overall, I wasn't sad about the time I spent watching, either.  All in all, it's worth a viewing.

Jon Wright's OUR ROBOT OVERLORDS (currently set for a 2014 release) will be the tie breaker. Will it be even better than Grabbers or will it drop back to Tormented levels? I'm hoping the upward and onward progression continues.

TORMENTED can be found on YouTube at the moment. 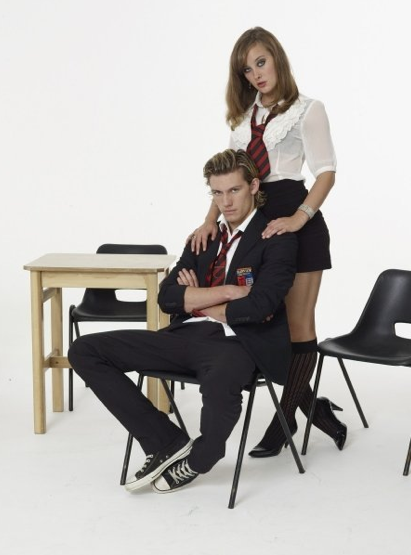 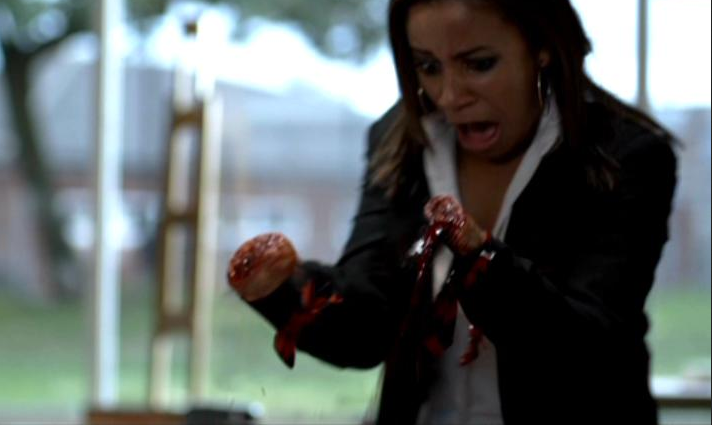 Posted by malcoJOJO at 10:39 AM No comments: 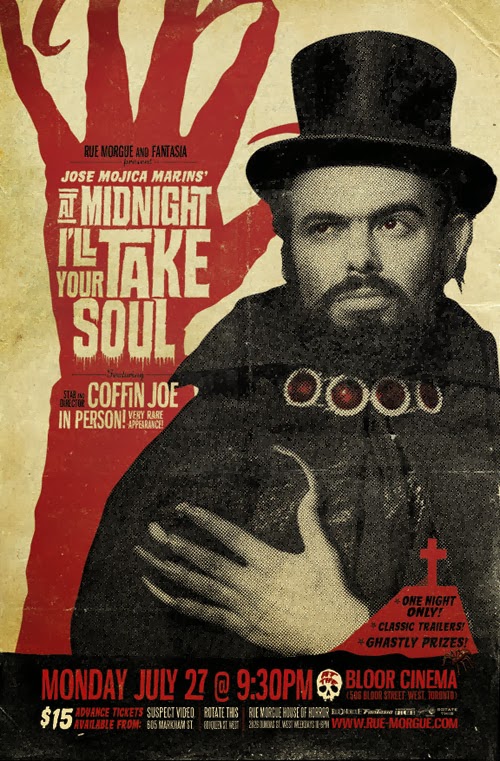 Posted by malcoJOJO at 11:46 AM No comments: 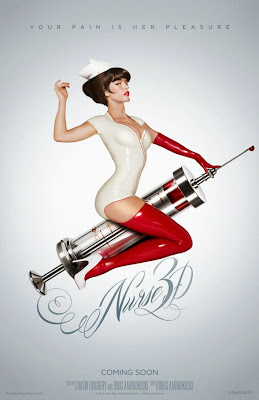 Ok, so....it looks like NURSE 3D might just live up to the super hype machine the past months have given us.

Tales of Paz de la Huerta being truly "off" and walking around the set in the nude even when she's not filming. Talk of the film being off the rails. And the blood drenched Paz poster that made the rounds months ago.

After seeing the trailer, it looks like this Single White Female-like tale might live up to all the buzz.


Director Douglas Aarniokoski has a lot of second unit experience and some Director credits that include the Sleepy Hollow TV Series, Criminal Minds TV Series and The Day, so it will be interesting to see what he's been able to do with some big screen goodness.

It could also be a good thing for the writer - David Loughery of 1989s STAR TREK: The Final Frontier fame.


Interesting for sure. But, is it going to be another movie that cashes in sex and sexuality just to be "naughty" unlike AMERICAN MARY that really used it as the icing, not the cake itself - a smart and dark journey into female empowerment by female Directors.  Tongue seems to be firmly in cheek with some of this, but I really hate when women are tossed around on screen in their underwear for no reason at all. Not that I don't like SEEING that, but it's boring and easy and happens far too often, unfortunately for the horror community.

It's going to be a wild ride either way!


The trailer is NOT safe for work (as the freeze frame below suggests) and it packs a lot in.

Posted by malcoJOJO at 7:42 AM No comments: 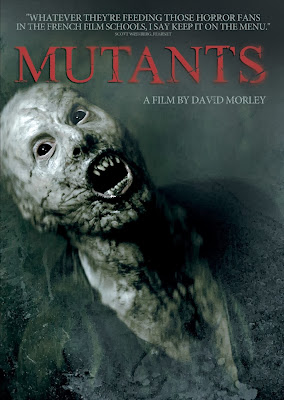 Another quickie review for the film MUTANTS - a French film that might be overlooked. I was zooming around the NETFLIX horror list a few years back and saw the cover for Mutants and was intrigued. It looked promising, so I gave it a go. I'm happy that I did.

The plot is simple - a plague situation is sweeping through the world and changing human DNA. A med-tech and her husband are traveling through the snow and are seeking out refuge after hearing a radio broadcast from a help center. (Memory is fuzzy here, but I think that's close) Of course, some of the most frighting things they need to deal with our other humans.

It's a tough one to drop into a bucket. It's not vampires, not zombies....they are...well...mutants. They come close to the 28 DAYS LATER infected - that's the closest. They look great and are frightening for sure.

The pace is slow and there is a lot of character interaction more than action, but it's really well done and the acting is grand and the tension high. It's always great to see a strong, female character kick some butt as well. No mincing around here - she knows what she needs to do and does it. Great to see. 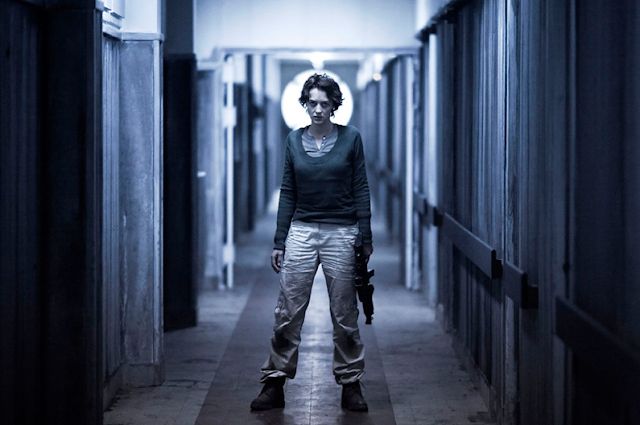 Seek MUTANTS out if you like story based horror. Especially now that the weather is colder. The cold plays a part in this film as well. So.....cold.....   :)  It's still on Netflix streaming at the time of this posting.

Let me know what you think! 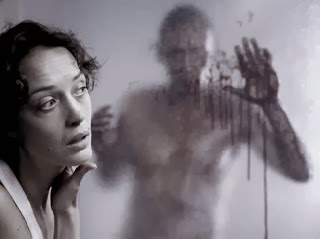 Posted by malcoJOJO at 10:28 AM No comments: