Forbidden Photos of a Lady Above Suspicion 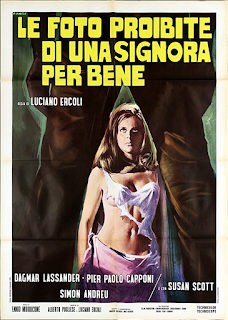 GIALLOCTOBERFEST 2017 Continues with....
Forbidden Photos of a Lady Above Suspicion

Sadly, this breaks the Luciano Ercoli tie between DEATH WALKS IN HIGH HEELS (negative) and DEATH WALKS AT MIDNIGHT (positive) to the negative side. I didn't really enjoy much more than HIGH HEELS, sadly.  It had a few choice nugget bits in it, but it was bloated and a bit slow overall.  I usually like to avoid negative reviews, but this was a direct follow up to my DEATH DOUBLE FEATURE, so it snuck in.

We have another Ernesto Gastaldi and May Velasco script, but this time without the spice of Sergio Corbucci and we're facing the same bleak cinemascape as we had in HIGH HEELS. Things drag on far too long and the plot isn't really rich enough to support the run time. However, there are some interesting elements and fun reveals here and there. 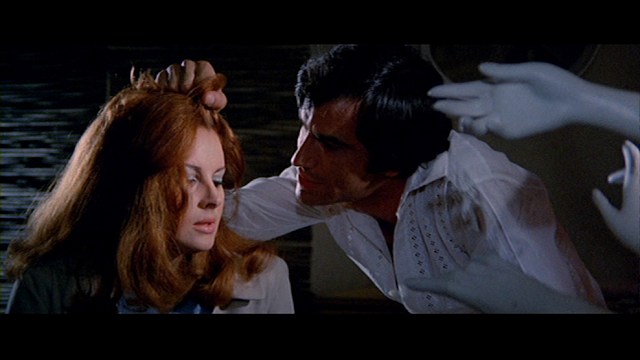 Dagmar Lassander (House by the Cemetery / Hatchet for the Honeymoon) turns in a rather dead eye performance as Minou, a housewife who faces a sadistic blackmailer (the gruff and mean Simon Andreu again) He doesn't want money, no...he wants...her body and soul!     It's rapey and mean spirited and not a lot happens, but Ercoli's does what he can with the script in interesting ways.

There are some wicked little things that Andreu's blackmailer does through the film that are rather fun - like a well placed message on a phone call. Those elements made the film more interesting for sure. It's almost like we needed an additional location or two. That's something that HIGH HEELS had in it's favor for sure.

The best part is that we get to see Nieves Navarro being her usual, spirited self and that's always dreamy. She really is the most alive person in the film. She seems to have fun in the role and is vibrant and fun while rest of the folks just wander around with dead eyes and sad faces. It really is a bleak offering.

With that, I think I'm done with Mr. Ercoli's works. I really did hope that I would like FORBIDDEN more than I did. It's still an ok watch. I think I'm just spoiled with the offerings of Fulci, Argento, and Bava. 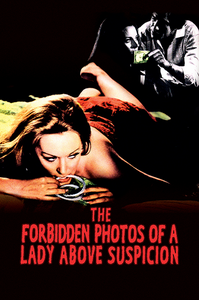