Watching horror in the theater 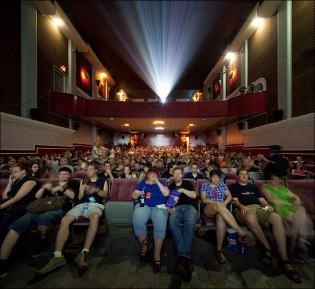 The recent buzz-and-grumble about V/H/S got me thinking a bit. People were saying that it's not worth seeing in the theater due to the hand held cam scenes and the general nature of the production. However, I disagree. I think that films like V/H/S and PARANORMAL ACTIVITY should be seen in a theater and that the experience is drastically different when sitting in the dark with other people in a theater - even a theater that only has 11 other people in it.

The movie MATINEE (1993) had a great scene in it where John Goodman talked about cave drawings and the social aspect of people getting scared about something together. 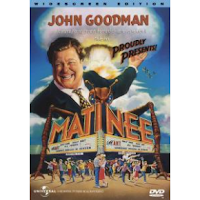 Lawrence Woolsey: A zillion years ago, a guy's living in a cave. He goes out one day, Bam! He gets chased by a mammoth. Now he's scared to death, but he gets away. And when it's all over with, he feels great.
Gene Loomis: Well yeah, 'cause he's still living.
Lawrence Woolsey: Yeah, but he knows he is. And he feels it. So he goes home, back to the cave, the first thing he does,
[Waving his hand on a brick wall to show cave-drawing of Woolly Mammoth]
Lawrence Woolsey: ... he does a drawing of the mammoth. And he thinks, "People are coming to see this. Let's make it good. Let's make the teeth real long, and the eyes real mean."


[Animated sequence of roaring Woolly Mammoth, squashed at end by Woolsey's hand]
Lawrence Woolsey: Boom! The first monster movie. That's probably why I still do it. You make the teeth as big as you want, then you kill it off, everything's okay, the lights come up...
[Pretending to sigh]

But, there's a point here. The fear. The being scared together in the dark. The internet and the easy access to movies (...and CRAZY costs associated with going to the theater! ) have made the theater experience something that's a second or third choice for people. Drive-In theaters used to make it easy for families to go to the theater with small children. Now, Netflix and other online movie delivery methods fill that spot.

However, I'll never forget seeing PARANORMAL ACTIVITY in the theater. Man, the buzz when something was going to happen. People sighing and ramping up for fear when a night shot would start. The tension in the air as things built to crippling heights. And, the screams when something scary happened. You can't get that at home unless you invite 100 of your close friends over to watch with you. :)

Stranger still was the fact that people had to be shooed out of the theater when it was done. It was 1:30am, but people wanted to stay and talk about the film. Once they were pushed out, they stayed in the hall of the theater area and talked some more. Outside, additional groups spoke  about the film and tried to laugh off the tension. 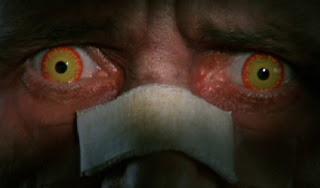 When I saw THE EXORCIST III in the theater, I found myself looking around to see who...or what...what in the theater with me from time to time. There were six other people in the theater for that viewing and the BLAIR WITCH viewing (afternoon weekday showings), but it was still a far different experience than watching at home.

I saw V/H/S in a small theater in San Francisco -  THE BRIDGE theater built in 1939. There were about 15 people total at the fantastic venue's 9:35pm showing. And, it was awesome. People behind me winced and muttered words of warning to the characters on the screen. A girl sitting in front of us wrapped her hands over her head at one point and muttered, "Oh God....oh God....no no....". And, I laughed out loud at a few situations because I had NO idea what I would do if it were me up there on the screen. There was an energy that swirled in the theater. A buzz. It made the movie more enjoyable.


What are your thoughts?

Do you enjoy the theater experience or have the internet and high movie costs driven you to the sanctuary of your home theater arrangement?

Posted by malcoJOJO at 9:25 PM