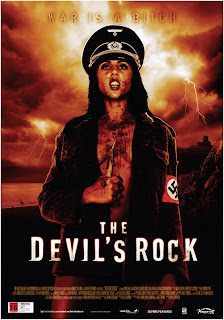 "Set in the Channel Islands on the eve of D Day,two Kiwi commandos, sent to destroy German gun emplacements to distract Hitler's forces away from Normandy, discover a Nazi occult plot to unleash demonic forces to win the war."
http://www.imdb.com/title/tt1712578/

There's a little something you need to know about THE DEVIL'S ROCK before going into it. I think it will make your viewing experience much better.

This is a slow burn, life raft sort of film. It's not thrilling. It's not action packed. It's a slow cooker with a handful of actors and a play-like atmosphere that takes place in one location. Now, this isn't a bad thing. Not at all. The acting is great and the story is interesting. If you like story based horror, this is for you for sure. If you love war movies, too, you'll be in heaven.

The film was rather well done and there were some nice, gore filled touches here and there. The demon makeup was lovely and reminded me of the Tim Curry Darkness makeup in LEGEND.

It's interesting to see how they try to make things a bit more sexy and sassy in the advertising. Sexy female Nazi with no shirt covered in blood. (...that is not in the film itself...) And they also slapped the demon on a few of the cover designs - right up front and center. I didn't include any demon photos because I thought it was better to see the reveal in the film itself, but I guess the studio thought that it was better to slather it all over to draw more thrill seekers in. :)

I love the fact that story was first here. It was rich and interesting and held my attention for sure.

If you're in the mood for some good 'ole Nazi's up to no good demon story, this will be right up your street and should please you. Take a look and let us know what you think. It's currently available through Netflix streaming at the time of this posting. 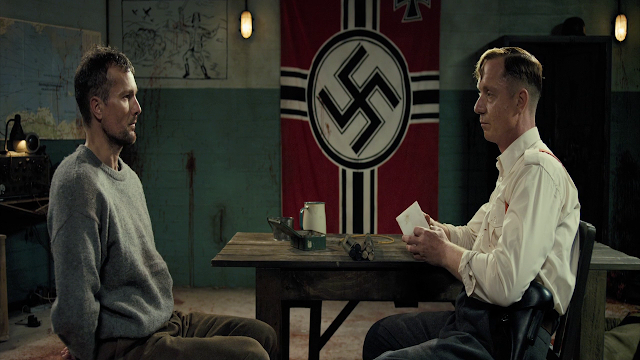 Posted by malcoJOJO at 2:20 PM