If you're anything like me, you're kinda done with zombies.

I was a HUGE zombie fan, too. The greats like the "Living Dead" biggies (Night, Dawn and Day), the Italian splatter of ZOMBI ("We are going to eat you!") and the goodness of the RETURN OF THE LIVING DEAD were firmly locked as faves. But the recent waves of zombie hordes have muddied the waters greatly. The likes of SHAUN OF THE DEAD, ZOMBIELAND and THE HORDE are getting lost in the much and mire of complete crap like the DAY OF THE DEAD remake - resplendent in it's under-scripting and over-bullshite 3D and leaping dead.

Well, THE DEAD (2010) marks the return to old zombie form and was WELL worth a viewing! And...there's no mention of zombies in the title. Thank you for that.

We have a classic set up here, but with a small twist that takes us in new and interesting directions. Zombies. They're here. We're trying to get away. But, we're in Africa complete with wide expanses of nothing for miles and miles. Our two heroes are both trying to get somewhere - one to a U.S. military base so he can get home and another to an African base so he can find his son. The pairing is fantastic and very "old school". Differences are set aside to reach a new set of very important goals.

The zombies themselves were a throw back to the 1979 Lucio Fulci style of ZOMBI zombies. Extremely slow moving and driven. They shuffle along at an extremely slow pace. This makes things a bit easier, but also is a perfect device for ramping up tension. There are scenes where we see several zombies off in the distance while someone is trying to complete a task. They shuffle closer...and closer...and closer and, while the danger isn't immediate, it creates a lovely sense of urgency. I found myself stomping my feet at times wishing the heroes would hurry up and get the HELL out. And, if a zombie mob does happen to slip up to you, classic zombie mob rules apply. They are slow, but a group up close and personal is deadly.

Dread and doom, heat and time and personal drive are played out really well.  The characters of Lt. Brian Murphy and Sgt. Daniel Dembele are well rounded and believable. I'd even say that non-horror lovers (that can take some scares and gore) would enjoy this film. It has a strong story and a lot of well rounded character development. 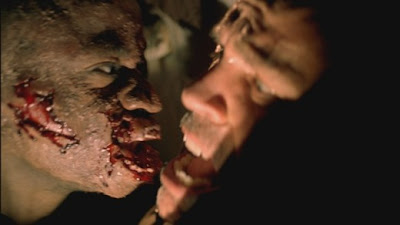