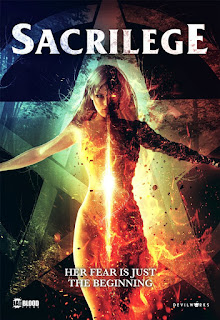 I had the chance to see SACRILEGE and dove on it. I love English Folk Horror films and just finished watching the fantastic THE THIRD DAY, so I wanted to make sure I caught this one to keep the folk horror rolling. Now, the THIRD DAY is a mini-series and spans over six hours of time, so I knew I wasn't going to get that level here, but Sacrilege manages to entertain.

Does it have its weaknesses? Sure. But, it held my interest and spun a fun yarn with material that can be very familiar to horror fans.

In a very small, compact nutshell, we have four women who go away on holiday to a lodge out in the middle of nowhere. It's established that one of our folks (Payne) has a boyfriend that just got out of prison for putting her in a coma after beating her badly. What better way to get over it than to go away? They snag a hitchhiker along the way (classic DO DO IT item in horror) who tells them about this awesome festival filled with pot and partying, so of course they want to go. They witness a ritual....then comedy ensues. :::grin:::

Like I said, very familiar territory, but they keep things rolling and have some fun horror stops along the way. I'm not sure they had enough horror elements to fill out the film 100%, but the side relationship stories lifted their weight and kept things moving forward. When the horror bits hit, they ring true and they are a ton of fun. I even barked out a laugh or two at the surprising nature of a few them. 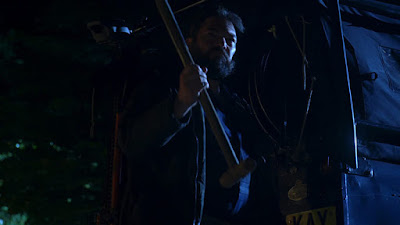 A Paul L. Smith-like (PIECES) performance from Chad Graham brought another fun aspect into the film. That classic, "I'm so sinister it hurts" vibe. The main cast of ladies are solid and keep the film in a higher level than some lower budget fair - acting well and bringing their "A game". That helped a lot.

English Folk horror fans will want to check this out. Just give it a little wiggle room to present its story. It's a fun watch and deserves some love.

After accepting an invitation to join in with local celebrations for the Summer solstice, four young women find themselves in the grips of a mysterious pagan cult.They are offered up as a sacrifice to the cult’s mysterious ancient goddess, who has the ability to sense their greatest fears. Using this power against them, she turns their nightmares into a horrifying reality.

Posted by malcoJOJO at 1:41 PM