The Night of the Hunted 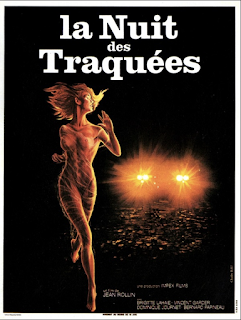 More Jean Rollin goodness here with THE NIGHT OF THE HUNTED. It's funny, now that I've seen several Rollin films and get his style, I'm liking them much more right out of the gate!

NIGHT tells the story of Elysabeth played by the stunning Brigitte Lahaie. She's wandering through the woods when Robert (Vincent Gardère) drives up and spies her. She's wearing a nightgown with no shoes and seems to be completely lost and slightly crazy. He manages to get her into the car and takes her back to his house when he finds out she can't remember anything. Nothing at all. It turns out her short term memory is shot and that she forgets things shortly after hearing them. (I believe that is short term memory damage) 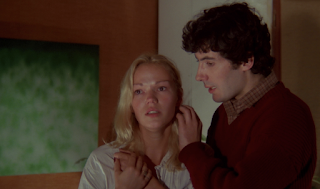 Now... slightly shifty Robert wants to help her, of course. She's a mess and scared of what's as you do - and hold her close. After about 4 seconds of contemplation, he makes love to her passionately. heh   He has to do leave the apartment for work, but writes down his name and number and who he is so that when he gets home, she'll be able to place him as the man who lives in the apartment. 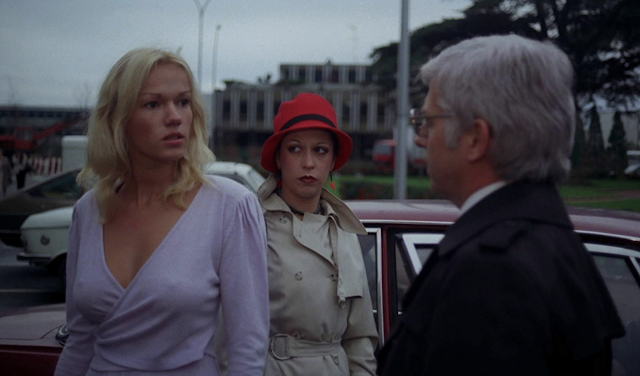 Shortly after he leaves, a man and woman show up to spirit Elysabeth out of the apartment and back to the odd, sterile clinic that she had made her way away from the night before.
happening to her.  But...you know...she's gorgeous and afraid and begs for him to make love to her -

The clinic is helping a group of people with the same memory issue and has them all there doing tests and treatments to fix them. But, is there something else going on as well? I don't want to say much more, though there really isn't a whole lot to spoil. There are the usual tropes in here, but the main fun is in the look and feel of the film, the acting, and the poetry of it, really.

For some reason, REDEMPTION video put this on their ZOMBIE COLLECTION 3pack! heheheh . This is not a zombie movie, though there are times where Elysabeth and her friend Solange are zombie-like in their movements. 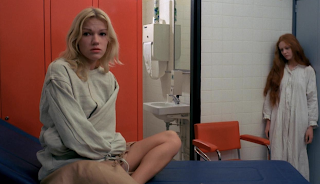 In typical Rollin fashion, the characters wax poetic about life and their situation and that makes me happy. Beautiful people stare off into space and recite prose that is just so very French and lovely. And there are strange little happenings like the aforementioned lovemaking between two strangers and a scene involving a bowl of soup later that is all at once heartbreaking and slightly humorous. There's a fever dream quality that I enjoy as well. People drift along as if sleepwalking. And the clinic is shown to be this massive high rise tower, but once you are inside it seems small and claustrophobic.


Then there are some unintentionally hilarious bits here and there like the doctor from the clinic shouting, "I want them alive!" right before firing several rounds at them with his gun. hehehehe . I loved that. 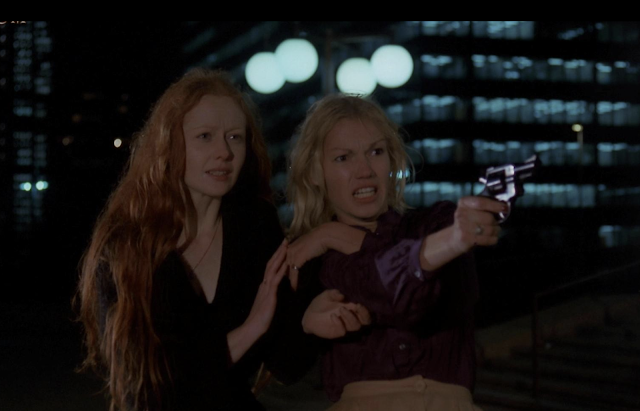 The film is a sad and poetic drama with some horror elements here and there - some of which are VERY horrific indeed, but it leans more towards THE IRON ROSE than towards THE LIVING DEAD GIRL or THE GRAPES OF DEATH on the Rollin scale. More story and character development than scares. I still enjoyed the film and was super happy to add it to my watched Rollin list.

If you are a fan of Jean Rollin and have missed this or if you love French cinema or dreamy dramas, you'll want to make time for THE NIGHT OF THE HUNTED for sure. 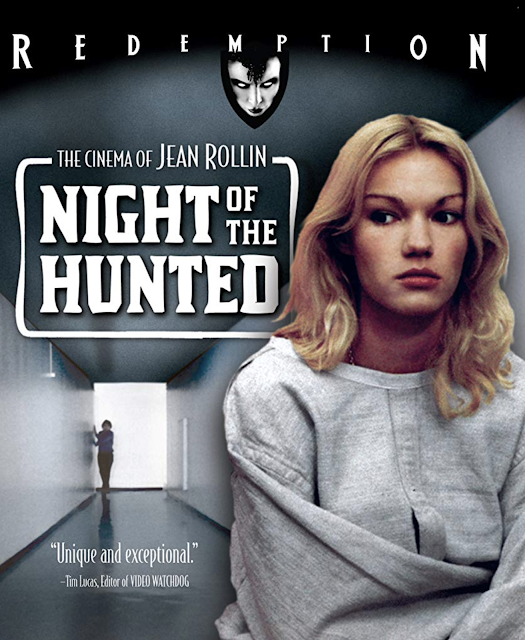 Posted by malcoJOJO at 3:14 PM