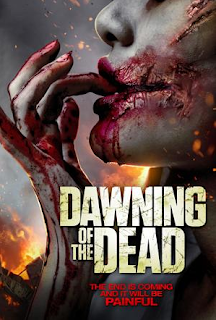 I have to say that this was a fun watch overall. More good stuff from the UK. 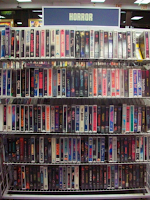 It doesn't really bring anything new to the table, but I think that's ok. It doesn't shy away from using copious amounts of computer driven graphics and blood - again, ok. But, it does take me back to a time where my friends and I would hit the video shop, scan the shelves for the most gory boxes, and gleefully flee home to watch the gore fest unfold. That's this film in a nutshell. 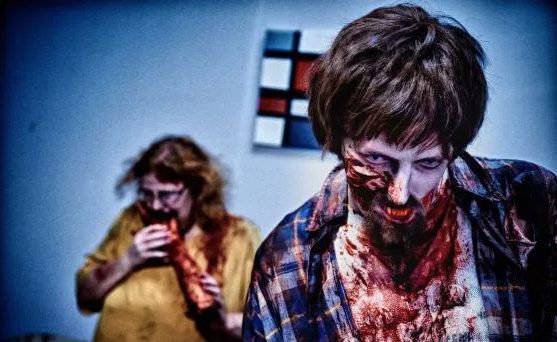 We have the dead. Some complex military source for the outbreak. And then carnage set mostly in and around a television station. Pretty much sums it up. Kinda like the beginning of the original DAWN mixed with DEAD SET. The film moves along at a good clip and things never get boring. Zombies run - sometimes in slow motion, and eat people up. Blood sprays. Eyes are white. You know the drill.

However, Tony Jopia knows how to have fun with a horror film. He make it fun to watch. I've seen my fair share of horror that IS NOT fun to watch and it's painful. It physically hurts to watch it. hehehe  Jopia lays down a solid base and moves the characters around skillfully to assure the viewer some good times while watching. I felt the same way while watching his other film CUTE LITTLE BUGGERS. http://horrorsho.blogspot.com/2017/09/cute-little-buggers.html  It's just a good time that takes me back to the good old 80s and gems like THE VIDEO DEAD, MOTEL HELL, STREET TRASH, and the like.

I have his other film CRYING WOLF (2015) on deck for later. Again, it looks like it'll be a fun time.

Don't take things so seriously, squint with the CGI kicks in, and just let Dawning of the Dead wash over you. It's a fun time.