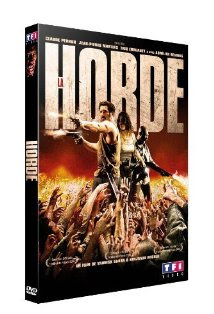 Riots. Protests. These are starting to be commonplace news headlines in France. Have been for a long while now. I believe that this is being reflected in the horror coming out of France these days. INSIDE. MARTYRS. These were really amazing and really disturbing films. While THE HORDE doesn't quiet hit those particular heights of madness, it does manage to entertain and thrill.

A classic “Good Guys v. Bad Guys” film goes zombie. Pretty much all you need to know about the plot. The action starts rolling minutes into the film and just doesn't stop. The bonus materials show one of the films directors - Yannick Dahan, I believe – viewing the scene through a monitor and shouting direction to the actors in a somewhat manic way. He's excited and thrilled by what he's seeing. This energy translates directly to what shows up on screen.

The group that was assembled for this was very interesting. French cops, Nigerian drug lords and a tenant who lived through a war and brought a little of it back with him. A fun teaming. When the good and the bad are forced to team up to survive, the tension grows and ads another element to things that keeps things rolling towards doom. 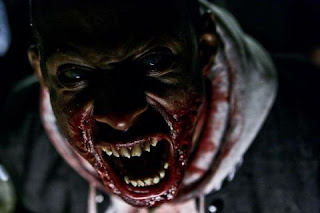 The zombies in THE HORDE are a lot of fun. They are the undead ramped up to 11 – meaner, stronger and a sweet mix of 28 days later “infected” and Dawn of the Dead remake flesh eaters. (sans leaping about like gymnasts!) The sheer amount of them and the relentless drive they have to eat make for some uncomfortable moments. They look grand, though their sharp teeth were a tad distracting.

The interesting thing – I was more taken by the social side of things than the zombie action. This is a good thing. Zombie movies are popping up everywhere. People are getting blood tossed on 'em and being thrown in front of the camera ad nauseam. Having a good zombie film with great social undertones is a true win. 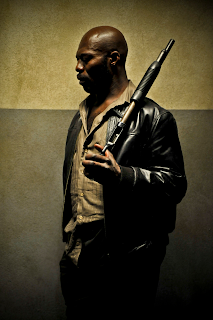 If you're looking for a fun zombie ride, pick this up ASAP.